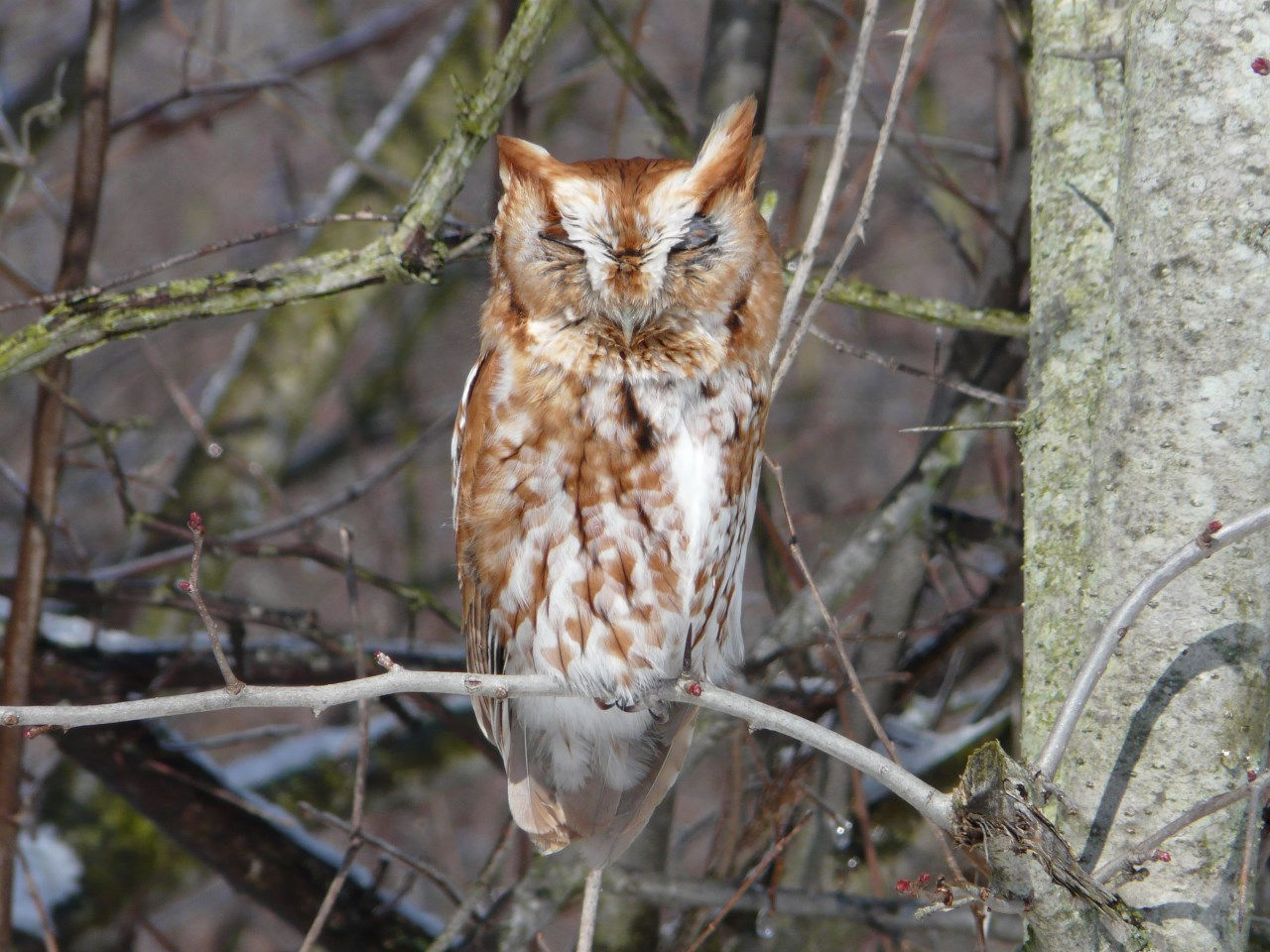 On December 19, 62 observers sponsored by Columbus Audubon spent the day counting birds in different areas of Columbus. The weather was cold for the date, being cloudy with a temperature between 9 – 26 ° F. The sky was cloudy for the morning, with limited periods of sun later in the afternoon. The final total was 81 species and 66,880 individual birds, which was an exceptionally good total given the cold temperatures and mostly frozen water. The complete breakdown was as follows:

Despite the frigid temperatures and limited open water, a large group of teams swarmed over Columbus to ferret out wintering birds. While we lacked any startling rarity, we did get almost all the expected birds and were able to reach over 80 species, a rare event for the Columbus circle.

Each team seemed to turn up something unusual. Blendon Woods pulled out a Mute Swan, Pileated Woodpecker, and Purple Finch (Bruce Simpson, Tom & Jody Slemmer, Rick & Richard Oxley), while nearby Charlie Bombaci found a flock of 29 Wild Turkeys in Cherrybottom Park and a male Northern Harrier over Casto Park. The Gahanna team also had a male Harrier, likely the same bird (Bob McNulty), while the Sunbury Rd team chipped in a Gadwall (Elayna Grody). The Jefferson Township group pulled out all sorts of goodies, including another big flock of Turkeys, 2 Red-headed Woodpeckers, a Ruby-crowned Kinglet, 10 Swamp Sparrows, and a Savannah Sparrow (Dick & Kathy Miller, the Gambills, and the Lindsays). The Reynoldsburg-Blacklick team snared Pine Siskins in Blacklick Woods as well as 3 Barred Owls and 7 Eastern Towhees (Pam Raver, Kristi Rowlands, Gene Stauffer).

Moving to the west side of the circle, the Greenlawn Cemetery & Quarries group scored a Merlin along with 2 Bald Eagles, 3 sapsuckers, and a Fox Sparrow (Jim McCormac & Bernie Master), while the nearby Scioto-Berliner team hustled up 32 Great Blue Herons, 3 Cormorants, and another Eagle (Larry DeAtley, Brad Ellyson, Pam Unger). Bob Royse scoured the Dublin Rd quarries and riverfront to pull out, among others, 2 Wood Ducks, 32 Ring-necked Ducks, 2 Bufflehead, and a Hermit Thrush. The sprawling Arlington-OSU West team found all sort of goodies, including 1 Rough-legged Hawk, 1 Screech Owl, 52 Horned larks, 1 Lapland Longspur, 1 Snow Bunting, and 2 Rusty Blackbirds (Dave Slager, Brett Graves, et al.). The Clintonville-OSU East team countered with 1 Green-winged Teal, another Rough-legged Hawk, a Merlin, another Screech Owl, 5 Sapsuckers, 2 Field Sparrows, and a Cowbird (Don Burton, Alex Champaigne, Paul Gardner et al.). I was amazed that so much stuff was found on such an unpromising day.

Raptors. Dec 19 was not a good day to be a prey animal in Columbus. Although we didn’t have any record numbers for single species, the cumulative total of 94 raptors was one of our best. Cooper’s Hawks, Red-tails, Bald Eagles, and Merlin were in near record numbers, and we also had rare visitors like Harrier and Rough-legged hawk.

Owls. The pressure didn’t let up once the sun went down, either. We had a record total of Barred Owls with 10 birds. They are doing very well in our riparian areas and MetroPark woods. We also had 3 Screech Owls in different areas, as well as 2 Great Horned.

Wild Turkeys. These big gallinaceous birds continue to slowly increase in NE Columbus. And the biggest totals didn’t come from Blendon Woods! There were bigger flocks in nearby Cherrybottom Park and more-distant Wengert Woods. Eventually they may invade most of the big woodlots in New Albany and Gahanna.

Sapsuckers. They just keep going up, with this year’s 21 topping the record from a few years back. Increasing numbers of these shy little woodpeckers seem to be learning how to negotiate the harshest parts of central Ohio winters. Many of them seem to hang out around spruce clumps, which offer them a steady sap flow as well as protection from the harsh wind.

Carolina Chickadees. We don’t often get to brag about these common little feeder birds, but we had a record total this year after flirting with the record for several years. Something is going right for these mighty mites, since they’ve had several good counts now. We suspect it’s the burgeoning number of feeders in Columbus, a trend that is only going to keep growing.

Fruit-eaters. Once again, big flocks of Robins and Starlings were mentioned by many groups. The fruit trees and ornamental plantings of our suburban neighborhoods attracted large flocks of these birds, and also supplied fair numbers of Cedar Waxwings and Mockingbirds. This is another trend that doesn’t look to be ending soon.

Rusty Blackbirds. These increasingly-rare forest blackbirds put in a decent appearance, with 3 at feeders on count day and another 2 at different feeders during count week. The species apparently uses oak acorns as an emergency winter food, so a switch to seed & nut feeders may not be as much of a stretch for them as for other blackbirds.

Dabbling Ducks. After several good winters, where the increased number of mitigation ponds in new developments attracted good numbers of unusual dabblers, 2010’s early freezing weather sealed up these ponds and drove these ducks south. Geese and diving ducks were less affected because they could adapt to the deeper water of the Scioto, which was mostly ice-free.

Carolina Wrens. While 70 is not a bad total, it pales next to the triple digits of recent counts. The early freeze had a crippling effect on these little birds. If it stays frozen into February, we may be looking at a severe drop in their numbers.

Brown Creepers. Oddly, these little guys were not in the numbers they registered earlier in December. Again, it’s likely that the early cold weather may have pushed many of them further south, as they’re not that good at conserving heat during the day.

Sparrows. With the exception of Towhees, most sparrows were in markedly reduced numbers. This is almost certainly due to the extended snow cover for much of late December. Many of these ground feeders probably had to struggle to find snow-free areas for foraging.

Open-country Icterids. Redwings, Cowbirds, and Meadowlarks continue to be a challenge for us to locate. These ‘blackbirds’ like open farm fields and feedlots, and we have very few of those left in our circle. Single Redwings and Cowbirds showed up at feeders, or we would’ve been skunked in this group.

Winter Finches. We just don’t seem to get many of them. On a year when other nearby counts were getting record numbers of Purple Finches and Pine Siskins, we got 1 and 5, respectively. And did I mention our lack of Evening Grosbeaks? This is where our paucity of large forest areas may be working against us.