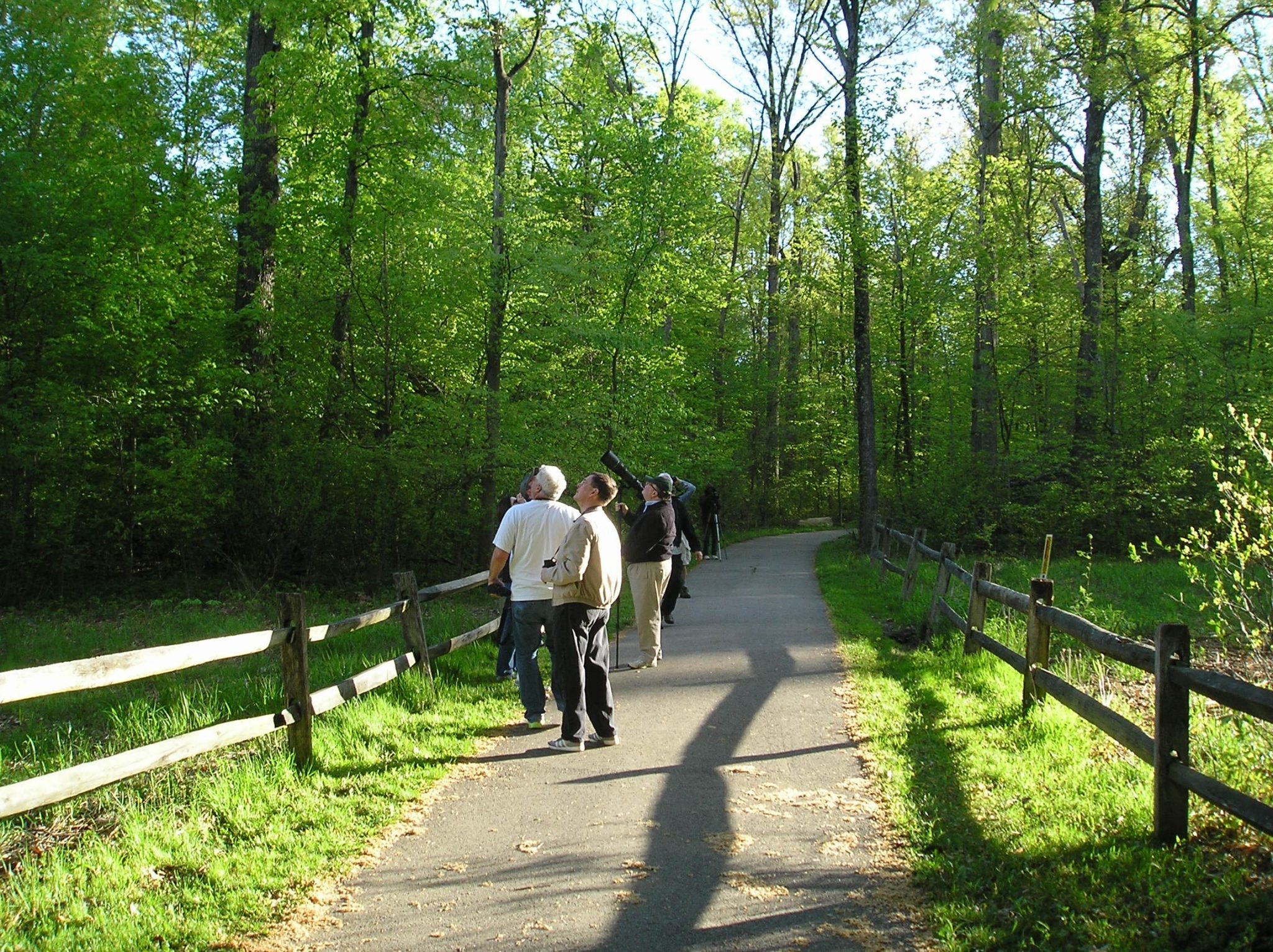 Every Spring, those of us birders in central Ohio enjoy the waves of migrants in an unusual fashion, telling each other how nice a morning was, then adding “but its not like up at the Lake” or “we’re going to Magee next weekend”.  It’s the same sort of civic insecurity and self-depreciation that manifests itself in a lot of other ways in central Ohio. Yes, many of the spots up around the Western Basin of Lake Erie are special spots in Spring, but there are plenty of special spots all over Ohio if you know how to find them.  Especially now with the Internet, you can be apprised of good local fallout spots almost on an hourly basis. And if you know a bit of migrant logic, you can predict where these spots will be. Let’s look at one of the recent attention-grabbers: Blendon Woods.

Blendon Woods has had a spate of recent reports of good migrant fallouts, especially from along the Lake Trail, a ¼ mile trail running from the Nature Center out to Thoreau Pond. This is not a new phenomenon, either; last year about this time also had great reports from here, as did the year before.  When I went this past weekend, there were birders strung out all along the Trail, oohing over warblers and ahhing over tanagers. It was a scene very reminiscent of the Magee Marsh Boardwalk, a comparison not lost on several of the birders to whom I talked.

Could this be our closest version of that reknowned migrant trap?  Yes, but no.  It’s true that Blendon Woods has increasingly become an isolated patch of forest habitat in a sea of subdivisions, as the nearby areas of Columbus, Gahanna, and New Albany have filled in with development. That almost guarantees a fairly healthy fallout in any migrant wave as tired migrants make a beeline for the only large forest patch in the area. Blendon also has a lot of different microhabitats, espcially along the Lake Trail, which appeal to a wide variety of migrants. Last weekend, we had forest migrants in the oak forest, edge migrants around the parking lot and powerline cut, field migrants in the pocket meadows, and swamp-loving migrants out at Thoreau Pond.

Our migrant bounty here along the Lake Trail is time-limited, however.  Others’ experience, along with my own, find that our run of migrants here is most noticeable now, in early May, but is much more muted by mid-May.  The Lake Erie migrant traps, however, are much more isolated and work to attract migrants almost continually from late March through early June. Follow the reports of Kenn Kaufmann or the BlackSwamp Bird Observatory, and you’ll see what a long season they have. It’s not the same for Blendon. Back in April, you didn’t see that many reports from the Lake Trail. In fact, other spots like Blacklick Woods or Three Creeks were better at that time. Later, Berliner Park & Green Lawn cemetery will take center stage.

So why do our best locations for migrants move around like this?  What we tend to forget is that these birds are mostly dropping in to refuel for further travel. Their first order of business, after finding safety (read ‘natural woods’), is to find food.  Most of the birds we saw last weekend were foraging, and they were using typical migrant tricks to forage. They were getting out to areas where the sun first hit to grab waking insects, and they were looking for flowering or budding trees, where these insects would be most concentrated.  Some of the best spots around the Blendon Nature Center and along the Lake Trail were in flowering apples & hawthorns or budding oaks, where the birds were frantically flitting, hopping, or probing, looking for insects or nectar.

What does this pattern mean for the rest of Spring migration?  For these migrants stopping in central Ohio, Spring is a moveable Feast, and they follow it. Early on, it’s maples and flowering shrubs; now its oaks and hawthorns, later it will be black & honey locusts. To maximize your luck in finding fallouts, you need to follow these patterns as well. The Lake Trail is good in early May because of the mix of flowers and budding oaks along it at that time.  By mid-May, other spots in Blendon will be better.  Green Lawn cemetery will have more food to offer, as will some of the other traps with lots of honey locusts (like Columbus Sate, Berliner Park, or Whetstone Park). You just need to start thinking like a hungry migrant and look for the all-you-can eat specials.