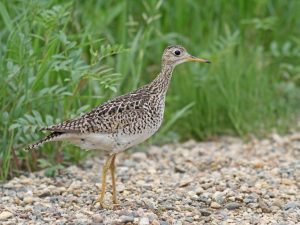 It’s early September, do you know where your shorebirds are? Sometimes it seems like the phrases ‘central Ohio’ and ‘shorebirds’ never really belong together. We’ve had such a dearth of decent shorebird spots for the last 5 years, that it’s hard to remember that this hasn’t always been the case. Shorebirds clearly migrate through here, but recently there have been precious few places to observe them in numbers, though perhaps that might begin to change.

Any shallow pond or flat area of a river can attract small numbers of shorebirds, but how do we get flocks of them?   What’s pretty clear is that shorebirds need large mudflats, relatively open and free of vegetation (since they get nervous in enclosed spaces), but inundated recently enough that the sand or mud still harbors the tasty little crustaceans, worms, and insects that shorebirds love. Where could we have those habitats?

Beaches – they’re not very common here, but that seems to make our beaches precious shorebird magnets…..if you can get there before the beachgoers. Beaches are at Alum Lake, Delaware Lake, Deer Creek Lake, and Buck Lake —- all state parks. Every year interesting shorebird and larid records come from all of them, but you have to pray that you can get there before the crowds scare off the shorebirds. For that reason, it’s hard to call these shorebird havens. But keep checking them, in person or on eBird or Facebook, just in case.

Reservoirs – With 5 reservoirs in central Ohio, and another 4 a short drive away, these should be the prime shorebird spots of central Ohio.  However, most of our reservoirs are steep-sided, either for all of their length (Griggs, Delaware) or most of it (Alum Lake, O’Shaughnessy). Only the upper part of Hoover, with its broad shallows, produces any extensive mudflats. But Hoover is the main water reservoir for Columbus, and the Water Department has been careful to keep it high the past few years. It’s even connected to Alum Lake by a pipeline, and water will be moved to keep Hoover from getting too low. It’s unlikely that Hoover will ever again see the big shorebird flocks that it had between 2000 – 2010, when dry summers produced huge mudflats at its northern end. Now, with the connection between the two, look for upper Alum Lake (Hogback Rd) to dry down first. This year (2019), O’Shaughnessy Reservoir will be lowered to allow repairs on the dam, so look for good shorebird habitat to emerge at Twin Lakes and the upper end of the reservoir (Area P, Pylon Point).

Of the nearby reservoirs, Deer Creek is the one most resembling Hoover, with extensive mudflats that develop on its west shore, along the Pancoastburg Road. Since it is lightly visited, shorebirds are often found on its mudflats and beach, and it has the added benefit of some man-made wetlands off Egypt Pike south of the Lake proper. If you’re willing to travel a bit further, Englewood Metropark over in the northwest Dayton suburbs has been a good shorebird haven for many years. It has several large flood pools in the floodplain behind a dam on the Stillwater River, and they dry down reliably over the summer, often attracting unusual waders and shorebirds in late summer and early Fall. 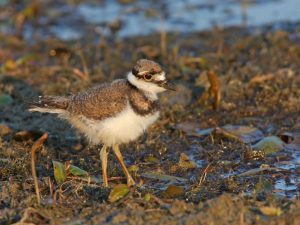 Farm Fields & Sod Farms – This is a changeable category, since one year’s flooded field might disappear the next. These so-called ‘sky ponds’ are often the best option for migrant shorebirds here in central Ohio, and many an old birder can recall some great temporary sites. One spot that has been reliably wet in recent years is along Swamp Road east of Kirkersville; another is along the entrance road to Bolton Field, a small airport west of Grove City. An area with a long history that that has been less reliable in recent years has been the River Road/Charlie’s Pond area south of Circleville.

Sod Farms are often the hidden gem in this group, both because they reliably flood after rains and because they attract a certain subset of sandpipers that like grassy areas (Upland, Buff-breasted, Baird’s, and Pectoral Sandpipers). Two sod areas that have been fairly productive for shorebirds after a rain are Darby Dan Farms just north of Battelle Darby MetroPark, and the farms along Kuhlwein and Murnan Rds east of there. Athletic fields, like those at Cruiser Park in Groveport or at Spindler Road park near Hilliard, can also be OK for shorebirds after rain.

Man-made Wetlands – This is probably the future of shore-birding in central Ohio: man-made wetlands dedicated to mimicking the highs and lows of Summer and Fall water levels. The MetroParks run sizeable ones at 5 different parks: Slate Run, Walnut Woods, Glacier Ridge, Battelle-Darby, and Pickerington Ponds. The Glacier Ridge, Slate Run, and Walnut Woods ponds are too vegetated to attract big flocks, but Mallard Marsh-Greenwing Pond (Pick Ponds) and the Teal Trail wetlands (Battelle-Darby) can have good flocks if their water levels are right. The problem with most Metroparks wetlands is that the parks usually allow them to grow into cattail marshes or shrub-swamps….great for marsh birds, but not so hot for shorebirds. This year, a combination of management and muskrats has kept the Teal Trail marsh open, so it should be very good for shorebirds.

Sometimes, the man-made wetlands aren’t really designed for birds, but can attract them just the same. Delaware Mitigation wetland, off US 37, was designed to offset wetland losses, but can attract small numbers of shorebirds. So can the upground reservoirs northwest of Marysville (Marysville Upground Reservoir) and west of Radnor (Columbus Upground Reservoir). Probably the most unusual site in this sub-category is the Hebron Fish hatchery south of Newark. The hatchery has a large number of rectangular ponds for rearing fish, and often lowers water levels in a few to clear out undesirable algae or vegetation, producing nice shorebird habitat in the process.

If you’re willing to go some extra distance, there are large man-made wetlands up at Delaware, Big Island, and Killdeer Plains Wildlife Areas. These marshes are managed to keep open-water areas that are attractive to waterfowl, and these same open areas are great for shorebirds if they dry down to shallows and mudflats. The Delaware Wildlife Area impoundment is the closest, off of Panhandle Rd east of the reservoir; some of the best views of it are from the south dike – walk east along it from where it crosses the road. The big impoundments along LaDue-Prospect Road (Big Island) and Pond 27 (Killdeer Plains) often are the best shore-birding areas in central Ohio, provided a dry summer lowers their water levels. They can attract big flocks and unusual shorebirds, almost enough to make you forget that you’re in the middle of Ohio. 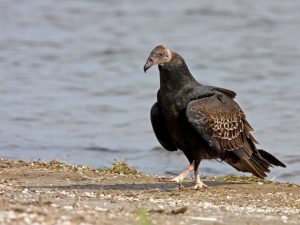 Black Vulture trying to be a shorebird – Photo Earl Harrison